My own European Voluntary Service (EVS) adventure started on 12th of November. I remember even though I was on the plane, going to Italy still felt like a dream. In fact, I had to pinch myself couple of times to remind myself that this was actually happening.

On 12th of November I arrived in Bologna and from there without any internet connection or Italian language knowledge I managed to travel to my actual destination, Trento. For those who don’t know where Trento is, it is the capital of Trentino region being located on the Northern part of Italy, in between Milan and Venice, close to Austria border.

As I arrived, I was greeted very nicely by my new flatmates and other volunteers. It was really incredible how everyone was welcoming. They had been cooking for me while I was on my way to Trento. EVS has its own perks like this. Even though we didn’t know each other at all, they were very happy and excited for my arrival. That feeling I had the minute I met with everyone was incredible. It didn’t feel like we had just met, but felt like we have known each other for a long time.

First weeks were all about orientation, getting to know people and the environment I was living in, adapting to the lifestyle and school I was working at. To my luck everything went smoothly. I had really great colleagues to work with, amazing kids who helped me with the language and incredible friends whom now I can count as my family.

My work was to help with English, art classes or storytelling since I volunteered at a primary school. It was incredible because there were kids who were able to speak English or other foreign languages fluently. I had some insecurities since I didn’t know how to speak Italian at the beginning, but somehow these children helped me through. The language itself was a challenge for me. Even though all the languages disappeared as we got familiar with each other, it was a crucial need to learn Italian when I wanted to communicate with younger children who weren’t able to speak English.

I used to work with first graders two times a week. My main work was to teach them basic vocabulary in English such as; numbers, days and colors to prepare them for the upcoming years. I will never forget the fact that despite not being able to speak Italian or understand it there was a little girl named Lucrezia, a 6-year-old, who was trying to communicate with me. Eventually, over the time she started using basic vocabulary in English to express herself and I started using Italian. Day by day we became closer. This is what happens when you volunteer; you meet with amazing people no matter the age, you learn from them, you experience pure love, you become more responsible and explore yourself in limits you don’t even know that exist. In addition to these, I improved my teaching skills, learned a new language, met and enjoyed my time with 8 other volunteers and local friends I acquired.

EVS is not just about volunteering to help but it is also about learning, sharing, exploring both yourself and your surroundings. Furthermore, it is about feeling good when you see a smile on another human being because you put it on their faces. It is a once in a lifetime experience that you can have. Now when I think about it, I huge silly smile forms on my face as I cherish my memories. 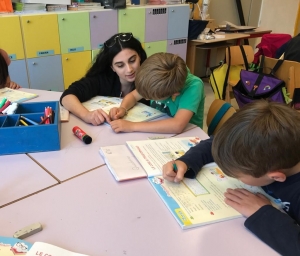 “It is really an once in a lifetime opportunity”- Rafaella

Greening Youth Information Services
Scroll to top
We use cookies on our website to give you the most relevant experience by remembering your preferences and repeat visits. By clicking “Accept All”, you consent to the use of ALL the cookies. However, you may visit "Cookie Settings" to provide a controlled consent.
Cookie SettingsAccept AllReject AllRead More
Manage consent